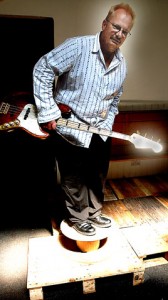 Tom Lyne, originally from Edmonton, Canada, moved to Europe after graduating from McGill University with distinction on jazz bass. His diverse roots range over many styles and genres as does his experience with many different instruments. Working predominantly in the Jazz world, Tom capitalises on the unique colours and ranges of the double bass and 5 string electric bass.

Tom has been a member of the musician’s union since the age of 18 (Canada initially and UK now) and as a composer has an extensive catalogue of original compositions with SOCAN (Society of composers, Authors and Music Publishers of Canada 1988-2002) and more recently transferring to PRS & MCPS when it became clear the move to the UK was permanent. Tom also writes and arranges scores for Jazz Big Bands and ensembles, instrumental ensembles of mixed styles of all sizes, Choirs, vocal bands, traditional R&B, and string arrangements.

In his home village of Pathhead, together with 14 other resident professional musicians, Tom has been a core founding of the Pathhead Music Collective. Initially started in 2006, the group has moved from strength to strength generating music and education events in their local community and in 2012 were awarded the Creative Places Award for towns and villages with up to 2500 residents. http://pathheadmusiccollective.org.uk/

Tom also runs Aspects of Sound, a sound design business, from his studio in Pathhead, and has recorded and produced CDs for individual artists and arts organizations in addition to producing his own compositions for commercial media. Previous posts include audio engineering for Caber Music, Sound Cafe Studio, and producing vocal tracks for Guidance records of Chicago. During the 90’s in Holland, T4 Productions (and then HillShed Multimedia) was set up to compose and produce soundtracks for promotional and educational videos, securing contracts with Ballast Nederland BV, Herman van Meekren, The City of Utrecht, LOKV (arts organisation), Lucas van Royen of Media Werk NL, and AT5 Television. This work also included the production of demo tapes and CDs for artists and enabled me to work in the emerging computer music, games and video industry.

Trio with Tom Lyne & Chick Lyall a new trio project in the works with appearances at the Blue Lamp in Aberdeen, the Jazz Bar, Edinburgh Jazz & Blues Festival 2014.

Sophie Bancroft is an influential improvising singer songwriter who has been working with Tom Lyne since 1998 and has played many festivals and concerts together http://bancroftlyne.com/. Their most recent CD is ‘Monday Nights’ which was release in November 2020. In November 2013 their Duo was selected in to be part of the 2014 Made in the UK Showcase and performed two concerts at the Xerox Rochester International Jazz Festival (June 2014). They also performed in New York City, and then the Tron Kirk at the Edinburgh Jazz and Blues Festival 2014. The most recent CD ‘You Turned the Tables on Me’ (2012) is their sixth release on LisaLeo Records since 1999.

Amy Geddes band – A trio with Amy Geddes on fiddle, Kevin MacKenzie (guitar) and Tom Lyne (double bass). The shared intimacy of these players brings a new sound to the Scottish fiddle scene mixing traditional and contemporary compositions. Their CD ‘Messing’ was released in 2012 and the band continues to tour throughout Scotland playing gigs and festivals.

The Dave Milligan trio is an esteemed piano trio that has performed at many venues and festivals around Scotland, England, Germany and Wales between 1999 to present. The trio has also worked as backing trio for visiting jazz artists such as Jaleel Shaw, Bill McHenry, Sam Newsome, Charlie Mariano and David Gordon (Sun Ra Band) and has one CD ‘The Late Show’ and a CD of works commissioned by An Tobar, the arts center in Tobermory titled ‘Shops’. http://www.davemilligan.co.uk/trio/

The Band Lyne. Since it’s inception in November 2005, it has become the vehicle for Tom Lyne to showcase his compositions, step forward as a soloist, and explore a refreshing and modern take on the electric improvising band. Joined by keyboardist Chick Lyall, accordionist Martin Green, and drummer Tom Bancroft, this quartet has struck up a unique sound and delivers an exciting concert.

Tom has always been involved in music education throughout his time in Scotland. Some of the teaching includes:

Whilst based in Amsterdam, Tom made numerous trips to Scotland to work with Tom, Phil, and Sophie Bancroft in various different bands; The Orange Ear Ensemble, The Phil Bancroft Octet, Trio AAB, Sophie Bancroft & Gina Rae, Kilt Couture. This work involved Assembly Direct tours around Scotland in addition to the Glasgow International Jazz Festival, the Edinburgh Fringe Festival, the Dunoon Jazz Festival and several BBC radio broadcasts. The work continued in Europe at the Banlieues Blues Festival, Paris, the Grenoble Jazz Festival and a tour of Hungary with Trio AAB.

After travelling to Nice, France in 1991 to help establish the band ‘Men Without Heads’ with his song writing partner, saxophonist Calder Spanier, Tom played, toured, recorded, and wrote music, living in Nice, Paris, Zurich, and Amsterdam where he finally settled. In 1993 the band became ‘Granny Smith’ and recorded the CD ‘Red Door’. Elstar Management and Rennet Records stepped in to handle management, touring, promotion, and distribution of the Granny Smith CD. The band ended as the result of the tragic death of writing partner and band member Calder Spanier.